About two weeks ago my husband and I noticed two kitties hanging around our neighborhood. They seemed domestic in behaviour (they would always run up when I greeted them) but they had no collars so I figured they were strays. After a couple days we asked a neighbour and they told us someone had moved away and left them. This broke our animal loving hearts! We knew we had to take care of them, whether that meant bringing them to a shelter or into our own home. (If you knew my husband, you wouldn’t be surprised that bringing them to a shelter was very quickly ruled out!)

On the first night with the kitties we offered them some dog food (not a good long term option, but for one night it did the trick). The Brown Kitty followed right after us to get dinner. The Black and White One however was VERY nervous and hid under a bush. We followed advice from cat enthusiast Jackson Galaxy to try and make her feel comfortable. We crouched down, closed our eyes, and offered our hands and heads to be smelled.  She wouldn’t budge though, so we let her stay in the safety of the bush.

The next day we made an agreement, instead of buying each other Christmas gifts we were going to spend the money on happy habitats for these abandoned cats. The first thing I did was purchase a bag of Purina cat food. I took “The Purina 30 Day Challenge” with my family’s cat years ago and it did wonders for her. Even the Black and White One was running over to our house when I brought this out! Within just a couple days I noticed a dramatic difference in their coats and attitude, they just looked healthier! 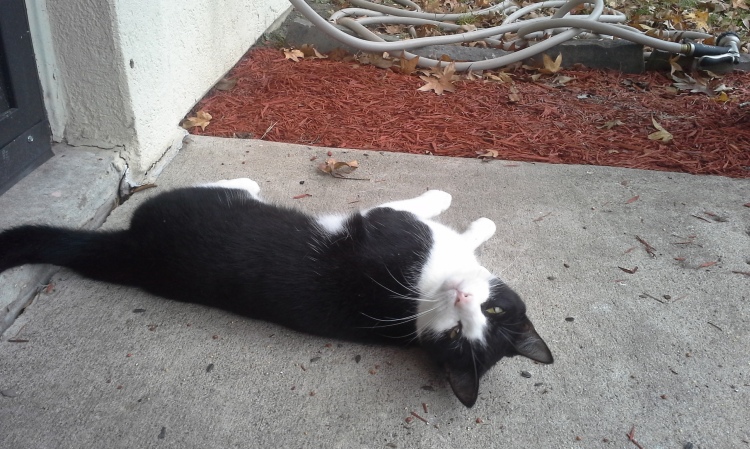 After a couple days of warming up to us and getting yummy food in her belly, the Black and White One started visiting our house regularly. We think Jackson Galaxy would be proud that she even likes to show us her tummy! We believe she was an indoor cat, that’s why she was so nervous when we first met her. She was out of her element, her family was missing, and strangers we approaching her – poor baby!!! We now take her inside at night since it’s been so chilly out. We’ve transformed our laundry room into a comfy kitty suite! (:

We think that the Brown One was an outdoor cat (probably with a cat door) in her last home, because she likes to be in control of being inside or out. Since we have a dog that isn’t too pleased with these new friends we don’t give her the option of coming and going as she pleases. For now she has been very happy in this cozy bed and blanket fort that my husband made for her (: we’re trying to work out a way for her to be inside at nighttime too!

Introducing these new family members to our extremely protective dog was a bit stressful (for us)! I asked on Facebook for advice and a wonderful friend suggested them meeting through the screen door. At first our dog barked like crazy and the kitties were afraid, but after quite a few “Glory, no! Be nice to the kitties!” she calmed down. The cats now could care less about our crazy pooch – hoping to eventually work their way into the house. For now we keep the screen door open all day to slowly get them acquainted.

Our Christmas was magical – it didn’t include presents under the tree, but the presence of these two beautiful kitties was more than enough! (hee hee pun intended) Have you ever rescued an animal? Don’t you love that warm fuzzy feeling it brings you?!? Tell me about your rescued pet in the comments! I believe wholeheartedly that animals are therapeutic! They bring so much joy and their thankfulness is contagious! I want to end with a perfect quote from Shultz and illustration from Mutts Comics. Wishing you all a very Merry Christmas! ♥

Have a beautiful day! ♥

Thanks for visiting! I love drawing cheerful stick figures! I hope they make you smile! Have a beautiful day! ♥ View more posts

One thought on “My Christmas Present: Two Abandoned Kitties”

What do you think? Cancel reply